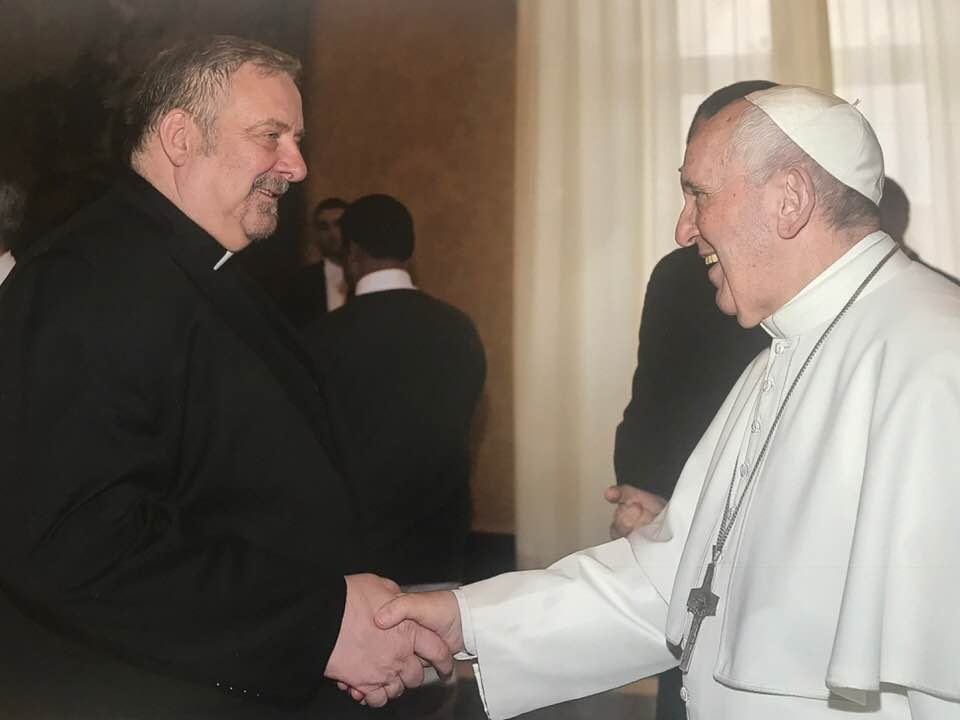 Pope Francis, like St. John Paul II, welcomes religious groups who are meeting for a particular reason in Rome, to come for a private audience. Of course, you must arrange it beforehand. Our General Assembly was invited to meet Pope Francis on Monday, May 20. Being missionaries, our meetings, although serious and sometimes tense, are casual. Monday morning, May 20, we were all dressed in black collars for our visit with the Pope. The audience began at 12:00 Noon (not 10:00 am as I previously wrote). We had to meet, all together, at the bronze door of St. Peter’s Basilica (on the right side) by 11:00 am. After our credentials were checked we slowly proceeded into the inner sanctum of Catholicism. Guarded and watched by Swiss Guards, we went inside, slowly. There is a large series of steps going into the Apostolic Palace. When I was here 18 years ago to meet St. John Paul II, we were led up those stairs. This time, we took a turn and started up a series of circular staircases, passing through various hallways (loggia). We passed through the cloisters of a courtyard and back into the building again. The loggia, the ceilings, everything is incredibly beautiful, as you would expect. We started up another series of stairs, when a Swiss Guard walked up to one of our bishops and asked if he would like to take the elevator. He agreed and grabbed my arm and said, Come on Ken, let’s go for a ride”. So, I got to see a few more loggia, and Swiss Guards. The farther up in the Papal palace you go, the Swiss guards no longer wear their colorful, striped uniforms. They were tuxedos – coats and tails. Very formal.

Eventually we arrived on the top floor, were led through a few meeting rooms, both large and small, to the last one. That was where Pope Francis would come to meet us. We arrived 30 minutes early. I imagine that most priest groups coming to meet the Pope would be seated, perhaps pray the rosary, remain in silence. We’re missionaries; people walking around the room, looking out the windows, taking pictures of the wall tapestries and ceiling. The guards just watched.

At 12:00 noon, as expected, Pope Francis entered with his secretary. HE took a seat and our Superior General read him a short introduction (previously approved by the Vatican). Pope Francis then greeted us and read from a text, certainly not one he prepared. Occasionally he would stray for the text and look directly at us. Then we felt like he was talking to us. He talked about being evangelizers, not proselytizers. He spoke about courage, and about joy. The Joy of the Gospel.

After his discourse, each of us lined up to shake his hand while our Superior General introduced us and gave the name of the country in which we work. As I shook his hand I asked him to pray for me and for my parish. He smiled. As each of us walked back to our seats, we were given a rosary with his papal coat of arms on the case. All in all, we were with him about 30 minutes. The trip back down the stairs and through the various loggia and halls went quicker. Back to work.
It certainly is a grace to be able to meet the Holy Father. What a job he has. We must continue to pray for him and for our church.

View all posts by stmaryjoy

One thought on “Meeting Pope Francis”